'Living for the City: Social Change and Knowledge Production in the Central African Copperbelt'

Comparing the Copperbelt project Principal Investigator and ASC Director Miles Larmer's new monograph Living for the City: Social Change and Knowledge Production in the Central African Copperbelt has recently been published by Cambridge University Press. The book is available online Open Access in perpetuity and can be downloaded here.  A hardback version is also available to buy via the publisher’s website.

The monograph is one of the major outputs of the ERC Horizon 2020 funded Comparing the Copperbelt project – for details of other project publications see publications. All publications are available Open Access. 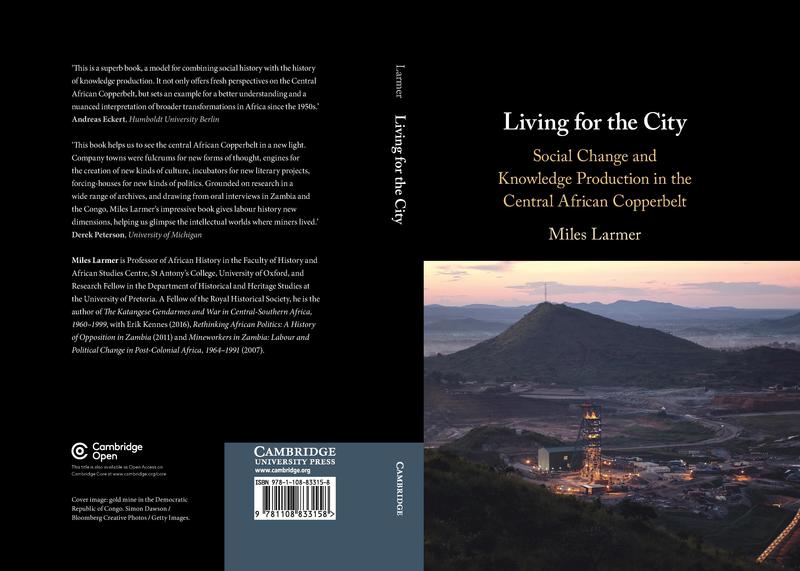 'Living for the City' is a social history of the Central African Copperbelt, considered as a single region encompassing the neighbouring mining regions of Zambia and the Democratic Republic of Congo. The Haut Katanga and Zambian Copperbelt mine towns have been understood as the vanguard of urban ‘modernity’ in Africa. Observers found in these towns new African communities that were experiencing what they wrongly understood as a transition from rural ‘traditional’ society – stable, superstitious and agricultural – to an urban existence characterised by industrial work discipline, the money economy and conspicuous consumption, Christianity, and nuclear families headed by male breadwinners supported by domesticated housewives. Miles Larmer challenges this representation of Copperbelt society, presenting an original analysis which integrates the region’s social history with the production of knowledge about it, shaped by both changing political and intellectual contexts and by Copperbelt communities themselves.

The Comparing the Copperbelt project, which commenced in July 2016, is hosted by the African Studies Centre and Faculty of History and is led by Professor Miles Larmer.  The project provides the first comparative historical analysis – local, national and transnational – of the Central African copperbelt. This globally strategic mineral region is central to the history of two nation-states (Zambia and Democratic Republic of Congo (DRC)), as well as wider debates about the role of mineral wealth in development.